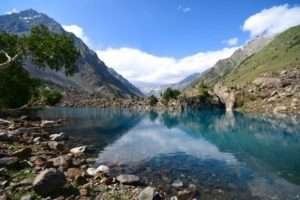 Pakistan is a beautiful country and home of some of the best hiking in the world. Towering mountains, lush valleys, dramatic rivers and lakes. The Himalayas in the North, where the most beautiful hikes in Pakistan are to be found, make the scenery incredibly dramatic, and increasing awareness of foreign tourists means it’s easier than ever to get lost, but not literally, in the true wonder of Pakistan.

To give you an idea of how amazing this country is, I assembled a list of spectacular treks in Pakistan. These are, hands-down, some of the best country in the entire world. If anyone is still on the fence about visiting Pakistan, I suggest they give this article a look.

So, without further ado, allow me to introduce you to twelve of the best treks in Pakistan! 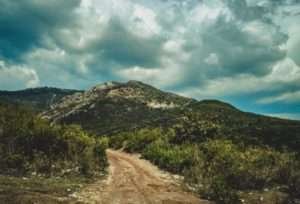 It’s handy that there’s actually an extension of the Himalayas right on the doorstep of Islamabad. Chances are you will start your Pakistan adventure in either Lahore or Islamabad. Either way, Islamabad is where you’ll catch your first glimpse of the mighty Himalayas and where you can head off into the mountains for some easy day hikes. The hills are a world away from the bustling city and a haven for nature, from birds to trees, it’s packed full of beautiful scenery. The views of the city from the vast hills is something else . . . 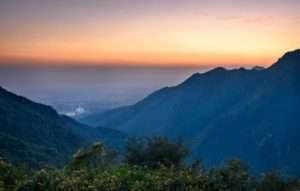 There are 6 marked trails into the Margalla Hills National Park – unoriginally titled Trail No. 1, 2, 3, 4, 5 and yes, 6. The most popular is Trail No. 3, which is very short, steep – you’ll be at a nice viewpoint in 30-45 minutes of hiking. Actually, there’s been a trend for health and fitness amongst the locals of Islamabad in recent years, so you’ll probably get to mingle with people escaping the city on these trails. The hiking trails crisscross each other, so building your own, longer hike is a good option when the longest of them only takes about 2 to 2.5 hours – measly by Pakistani hiking standards, but definitely not bad when they’re so close to the city!

2. K2 Expedition via Baltaro Glacier – The Highest Mountain in Pakistan

It’s the granddaddy of all mountains in Pakistan; the singular reason why many people decide to travel to the country in the first place. At 8611 meters, K2 is the second-highest mountain in the world and without a doubt one of the greatest adventures we can think of.

K2 is not an easy mountain to get to. Locates at the far end of the Baltoro Glacier, which is 63 km long, the return trip to K2’s Base Camp takes over 2 weeks to finish. Make no mistake: this trek is not for newbies and will require grit, determination, and a passion to complete. If you should undertake the hike though, you will be able to see the highest mountains in Pakistan and some of the most awe-inspiring alpine scenery in the world. 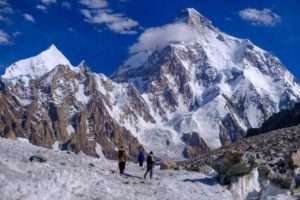 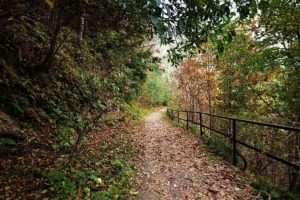 This one is better known as the ‘Pipeline Track’ since it follows the route of an important water pipeline that used to service the historic hill station of Murree. That’s convenient because it also offers up an easy hike from Dunga Gali to Ayubia within Ayubia National Park. Think fresh pine forests and stunning scenery and you wouldn’t be far wrong, For those who are less keen on scrambling up mountains and camping in the middle of nowhere, this one might be a bit more up your street.

This easy 5-km hike is popular with Pakistani tourists. So put your best selfie face on because you’ll probably get asked for a zillion of these when the route is popular in summer. It’s very close to the country’s capital, just a couple of hours’ drive northeast. Good to do en-route to the further northern reaches of Pakistan if you can spare the time.

North of the Pipeline Hike is another hill station town, Nathia Gali, to the east of Abbottabad. From this former colonial hill station, you can walk just 2 to 3 hours to the summit of a nearby mountain, Miranjani. The track up what is a hill by Himalayan standards begins at the Nathia Gali Bazar and passes through the serene Dagri Naka mountainous region, you’ll hike through lush and chill pine forests surrounded by subtropical evergreen forest.

It’s not a challenging hike, but it is easy to get to and offers some pretty great views. There are places to stay in Nathia Gali too. If you want to visit a hill station in Pakistan, this is a good option as it’s nowhere near as crowded as Murree in summer – in my opinion though, you’re mad to go to Pakistan in the summer! You will notice many places in this area have the word ‘Gali’ in their name, which means basically ‘valley’ and is characteristic of this small region north of Islamabad called Galyat. 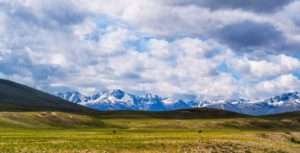 Deosai is world’s second highest alpine plateau. In popular culture it is also known as the roof of the world. It is more than 13,000 feet above sea level and spans over a vast area of 3000 square kilometers. An amazing placing for camping, Seemingly endless pastures covered in wildflowers make up the vast area of Deosai. Deosai means ‘Land of the Giants’ and when you look out across the never ending green expanse you can see why.

The National Park was created in 1993 to protect the Himalayan brown bear, and as the snow thaws in summer the meadows come alive with flowers and butterflies, you see it’s a haven for a lot of other wildlife too.

From Skardu to the northeast of the National park, it is possible to trek through the Burji La Pass to Deosai, however, this is a very long route! Most people get a jeep from Skardu into the park and work out a guide from there, or from Skardu itself. A couple of days trekking, with at least one Wildlife Project encampment between, leads you to the majestic Sheosar Lake. You cannot trek independently in Deosai as it’s a National park so you will need a guide. 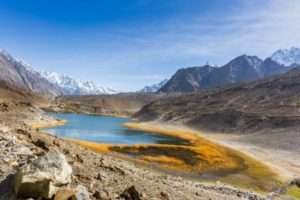 Passu is everyone’s favorite place in Pakistan, although honestly, it’s tough to pick as I also love Karimabad, Deosai, The Fairy Meadows and a string of other truly special places. OK, OK, back to Passu! Passu is a village famous for the Passu Cone mountains and an Indiana Jones-Esque bridge crossing a raging river.

Passu is found in the Hunza Valley, a remote area where the mountain scenery is truly stunning. This intermediate difficulty day hike begins at a (normal) bridge over the very short Passu River, passing the Restaurant Glacier Breeze – from here you can see the impressive ridge of the Karakoram range, an amazing sight… Looking back after a few metres further up is equally amazing, where Passu looks like an oasis and the jagged mountains pierce the sky.

Keep following the path until you hit Passu’s glacial lake at the end of the 18-km long glacier itself. A scramble up loose moraine, a view back to the Hunza River, and following the ridge on the other side you’ll find Lake Borit, and further in the distance Lake Attabad, a crazy bright turquoise lake created when a landslide dammed part of a river…  This is a truly gorgeous place to chill out with a cheeky smoke. 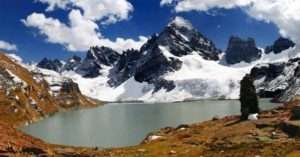 Pakistan has a knack for offering up amazing pockets of lakeside paradise, mirror surfaces ringed with green nestled in jagged snow peaked mountains. Chitta Katha is one of those lakes… It’s in the Shounter Valley, in the Azad Kashmir region of Pakistan not far from Angar Kel, a hill station left over from colonial rule now turned in to popular resort. You can hike here in an hour or so if you wanted,

But the hike to Chitta Katha Lake starts with a jeep ride from Kel to Shounter, where you may need to find a guide as the trails onward is not marked.  The climb from Shounter to the lake goes from around 3,000 metres to almost 4,000 – the scenery changes from alpine forest to one that is much more barren, But the reward is worth it, the views over Chita Katha really are beyond words!

World’s Ninth highest mountain and my happy place, Nanga Parbat, towers against the horizon in the distance. You’ll be walking around 12 hours in all, with camping at one of two base camps, so equipment and food are essential. Needless to say, this is a hike for summer when the lake is actually accessible.

8. Minapin to Rakaposhi Base Camp

In another section of the stunning Hunza Valley is this hike to the base camp of Rakaposhi, the 27th highest mountain in the world. It’s proven tricky to climb its summit over the years so there have only been 8 successful expeditions since it was first done in 1958! However, trekking to the Base Camp is relatively easy and you can do it with basic mountaineering gear.

Navigating this area seems daunting but it’s easier than you’d think. You can base yourself in the nearby town of Karimabad. If you decide you want to take a guide get in touch with Adventure Planners. The trek begins at a village called Minapin, picking up the trail behind the only guest house in town. The first few kilometres are tough, with steep glacial moraines to contend with, but stick to its left side and eventually, the ridge comes into sight. A couple of hours more leads you to a tiny cabin where you can spend the night. Then the route carries on the left side of the glacier till you reach a green pasture, the base camp. The panorama from here out over the Hunza Valley is mind-blowing!

West of Rakaposhi is the magical Naltar Valley, famed in winter for its skiing as the ‘Magic Carpet of Pakistan’ – ski competitions are held here under the watchful eye of the Pakistan Air Force. But we are here for the hiking and luckily the natural scenery here is incredible. The village of Naltar is set in a pine forest with magnificent mountains rising up around, one of those captivating half mythical, half alpine places that make exploring Pakistan on foot so rewarding. Sure a jeep ride is fun but it can only really get you from A to B, whereas walking puts you directly in that landscape, and Naltar Valley is somewhere you really DO want to be!

It will take a jeep ride to get to Naltar in the first place, most likely from Gilgit about 25 miles south. You can then hike a track from the village to the three Naltar lakes, one green, one dark, and the last one is this unreal azure that is truly spectacular. Early to mid-summer is the best time to visit as even up here at 3,000 metres above sea level it can get pretty uncomfortable.

It’s not just the name that’s mythical, the place itself is magical. The Fairy Meadows in February (very challenging as there was waist deep snow in places) and August and September. If you go at the right time of the year, i.e. when it’s not covered in snow, you can push on to Nanga Parbat Basecamp – an 8 hour round trip hike. Trekking to the Fairy Meadows itself is pretty easy and can be done in a couple of hours. 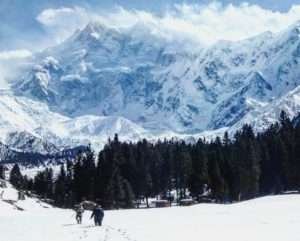 Looking down over the Fairy Meadows is the snowy fortress of Nanga Parbat (9th highest in the world, remember).