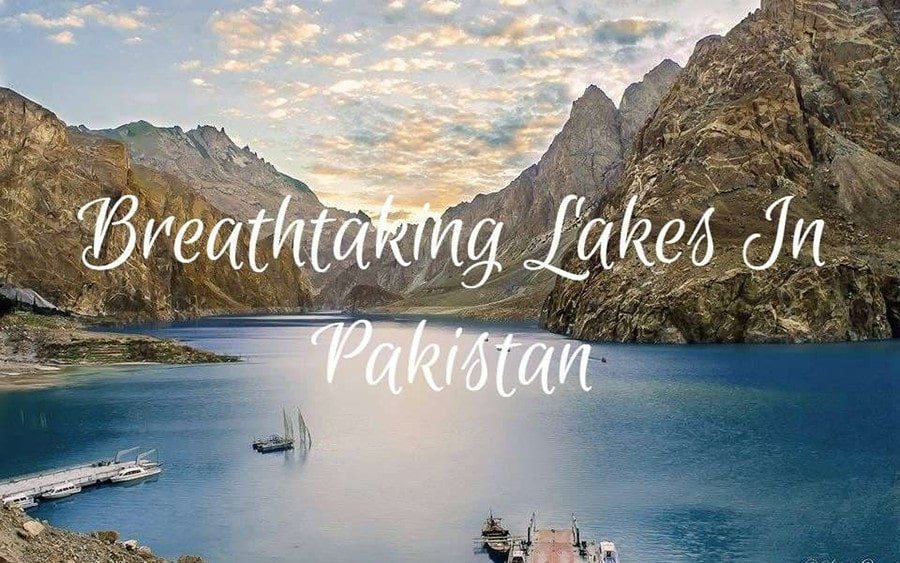 Rush Lake is the highest lake in Pakistan, situated near Rush Pari Peak at 5,098 m. It is the 25th highest alpine lake in the world. Located about 15 km north of Miar Peak and Spantik (Golden Peak), which are in the Nagar valley. The lake can be reached via Nagar and Hopar and via the Hopar Glacier (Bualtar Glacier) and Miar Glacier. The trek to Lake provides breathtaking views of Spantik, Malubiting, Miar Peak, spectacular Peak of Phuparash and Ultar Sar.

Another breathtaking lake from Gilgit, Baltistan. The Satpara Lake is a natural lake near Skardu, which spread over an area of 2.5 km². The lake fed by the Satpara Stream. Also, it is one of the largest fresh water lakes in Pakistan. In addition, it supplies water to the whole Skardu Valley. The beautiful Satpara Lake is located at an altitude of 8,650 feet.

Dudipat Lake is located in the extreme north of the Kaghan Valley, in the Mansehra District. Amongst the most beautiful lakes of Pakistan, Dudipatsar is a lake encircled by snow clad peaks in Lulusar-Dudipatsar National Park. The name “Dudipatsar” has been given to the lake because of the white color of snow at surrounding peaks. The word “Dudi” means white, “pat” means mountains and “sar” means lake. The water of the lake reflects like a mirror during the summer. The lake is accessible for 4 months from June to late September. In the summer, you can travel to enjoy the enchanting views by the trail, located at Besal, which is about an hours drive from the Naran. The road is accessible by Jeeps, cars & bikes.

The Shangrila Lake spot fourth amongst the most beautiful lakes of Pakistan. Also known as “Lower Kachura Lake” and is located at a drive of about 20 minutes from Skardu town. The lake is a part of the Shangrila resort and is a popular tourist destination. Shangrila was named after a book titled Lost Horizon by James Hilton. Shangri-la is a Chinese (Tibetan) word meaning “Heaven on earth”.

This alpine lake is at no. 3 in our list of 10 most beautiful lakes of Pakistan. Saiful Muluk lake located near the town of Naran at the northern end of the Kaghan Valley, at an altitude of 3,224 m (10,578 feet). Therefore, it is amongst one of the highest lakes in Pakistan. And a fairy tale called Saiful Muluk (the story of the prince of Persia who fell in love with a fairy princess at the lake), written by the Mian Muhammad Bakhsh (famous Sufi poet), is associated with the lake. The impact of the lake’s charm is of such extent that people believe that fairies come down to the lake in the full moon.

Also called Sheosar Lake a lake situated in Deosai National Park, in Gilgit-Baltistan. Deosai Plains is no doubt one of the marvelous places on earth. Also, it is the second highest plateau on earth after the Tibetan Plateau. The plateau is called by many sources ” Bed of Flowers” because of its beautifully colorful with all sorts of flowers. The lake with an approximate length of 2.3 kilometers, width 1.8 kilometers, and average depth 40 meters, is at an elevation of 13,589 ft in the Karakoram-West Tibetan Plateau alpine steppe.

A place you ever dreamed to visit. Undoubtedly, this lake is more beautiful than anyone can dream. That’s why, the famous writer Mr. Mustansar Hussain Tarar calls this lake, A Dream Lake. This beautiful lake is located in Neelum Valley, Azad Kashmir, at the height of 12,130 feet above see level. It is accessible from Dowarian (base camp to this lake) by a 19 kilometers hiking trek. Besides the lake it’s the Lush green pasture, filled with wild alpine grass and flowers, which increases the charm of lake. Manchar Lake, with an area of over 100 m2 is largest lake in Pakistan and also the largest lake in South Asia. Rush Lake, with an altitude over 15,400 ft, is the highest lake in Pakistan, also the 25th highest lake is the world.

Kundol Lake also known as Kundol Dand, is a lake in Swat Valley, KPK, Pakistan, which is located in the north of Utror valley at a distance of 20.8 kilometres (12.9 mi) away from kalam. Similarly, there is a well known story about the lake which is that every night in a month, a golden bowl appears in the center of the lake and glistens like moon but no one has ever touched that bowl due to magical powers inside it.